I use “focus stacking” to create most of my still cactus flower images … details on that process appear below the images themselves.

My still images and “still timelapses” (a series of still images showing a flower or group of flowers at various points in the blooming process) have been exhibited as large format prints as well as here and elsewhere online. If you’re interested in displaying some of these images, please get in touch via the Contact page here at echinopsisfreak.com. 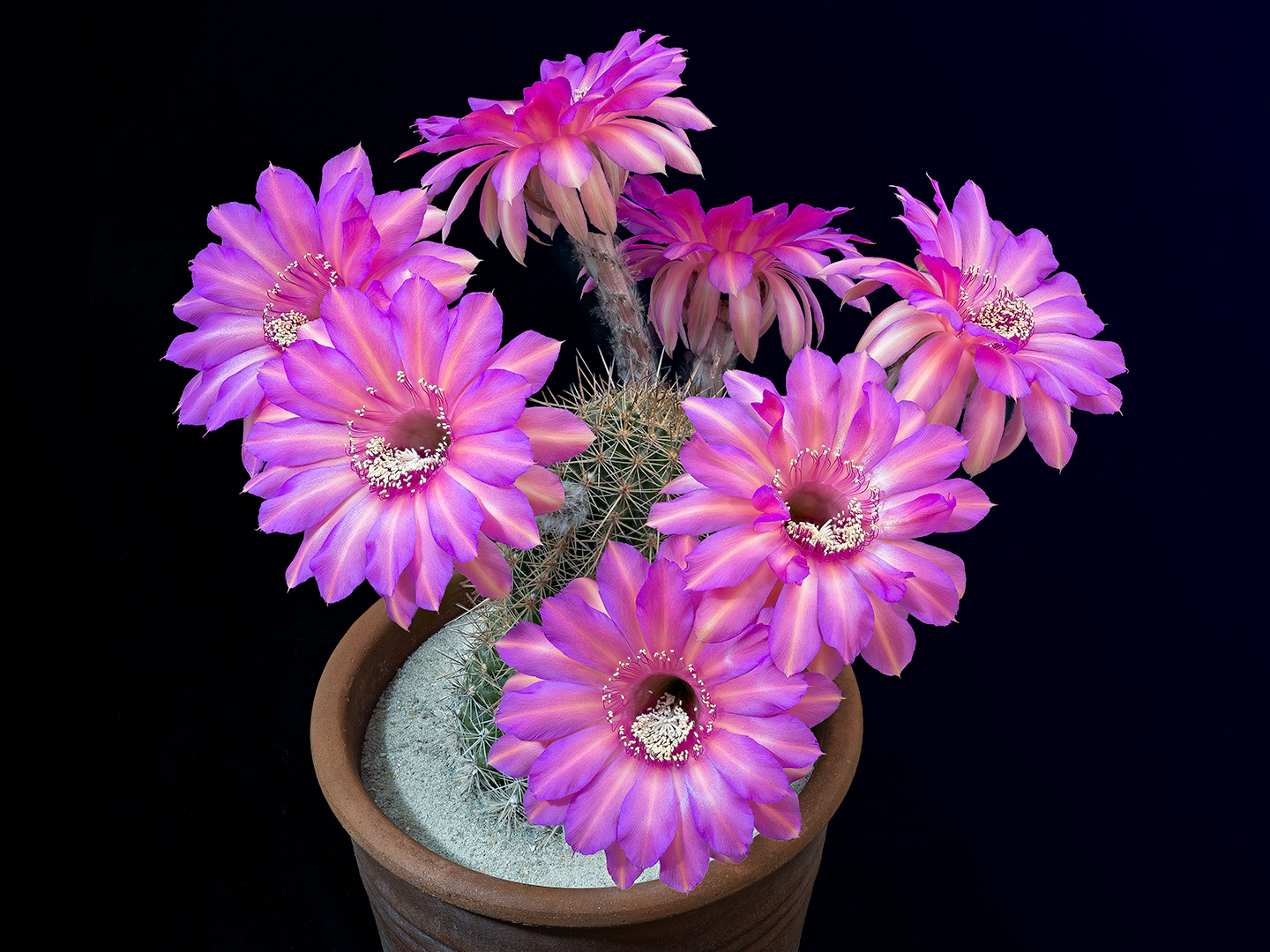 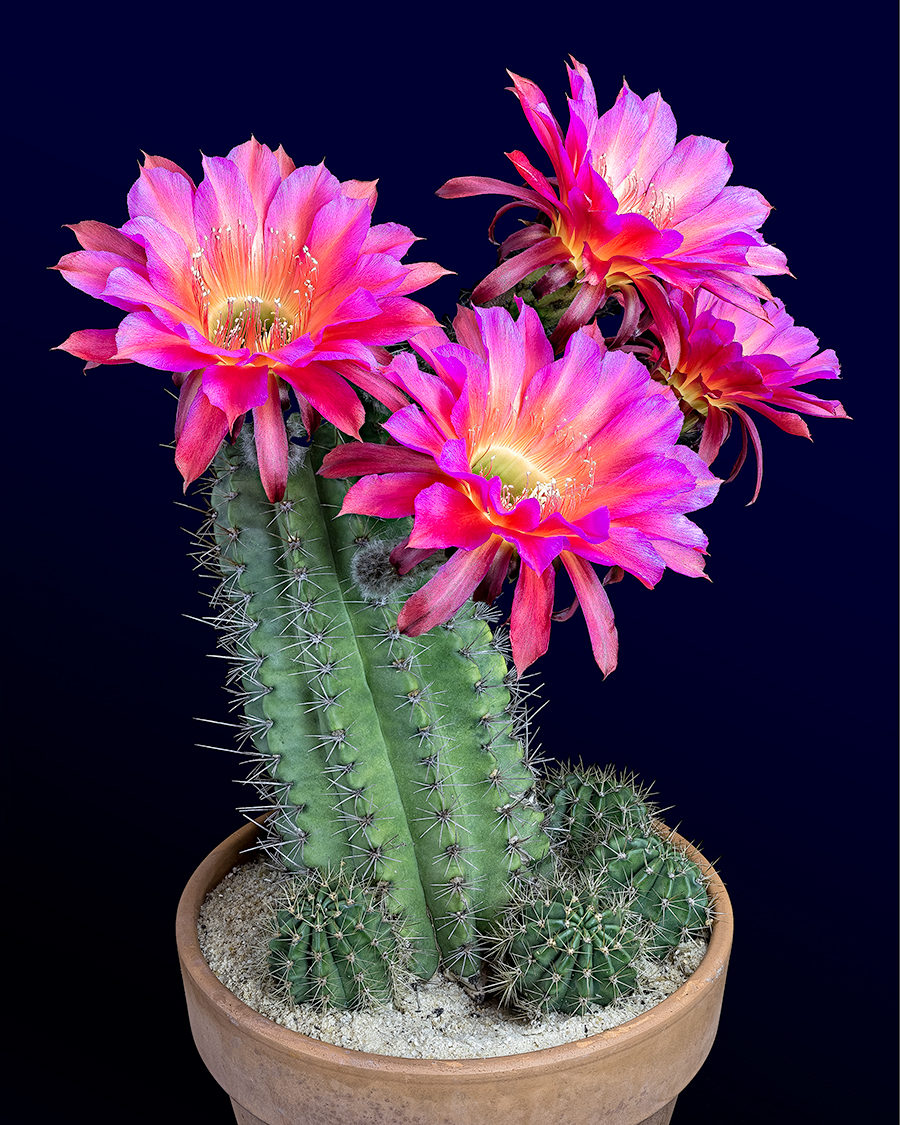 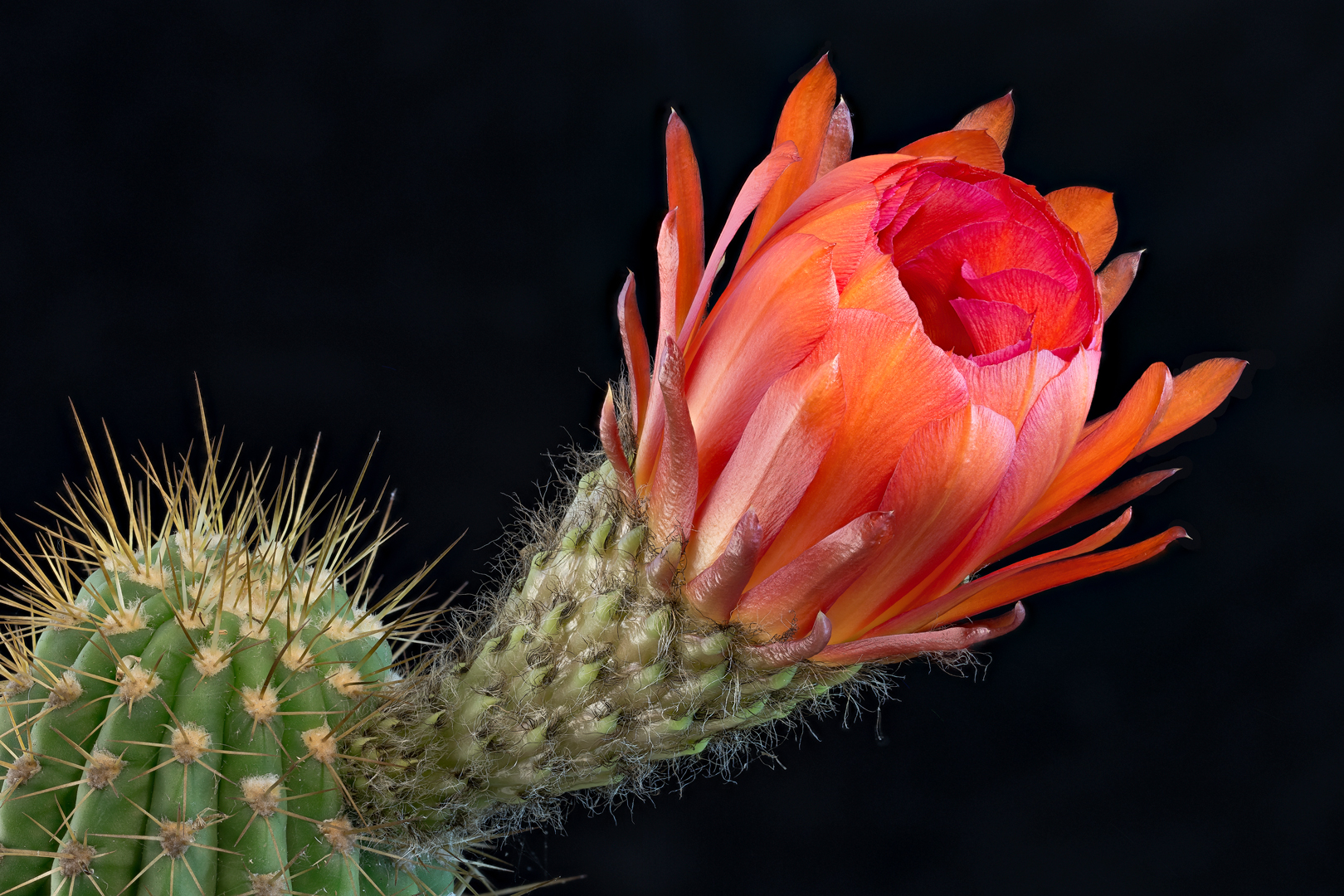 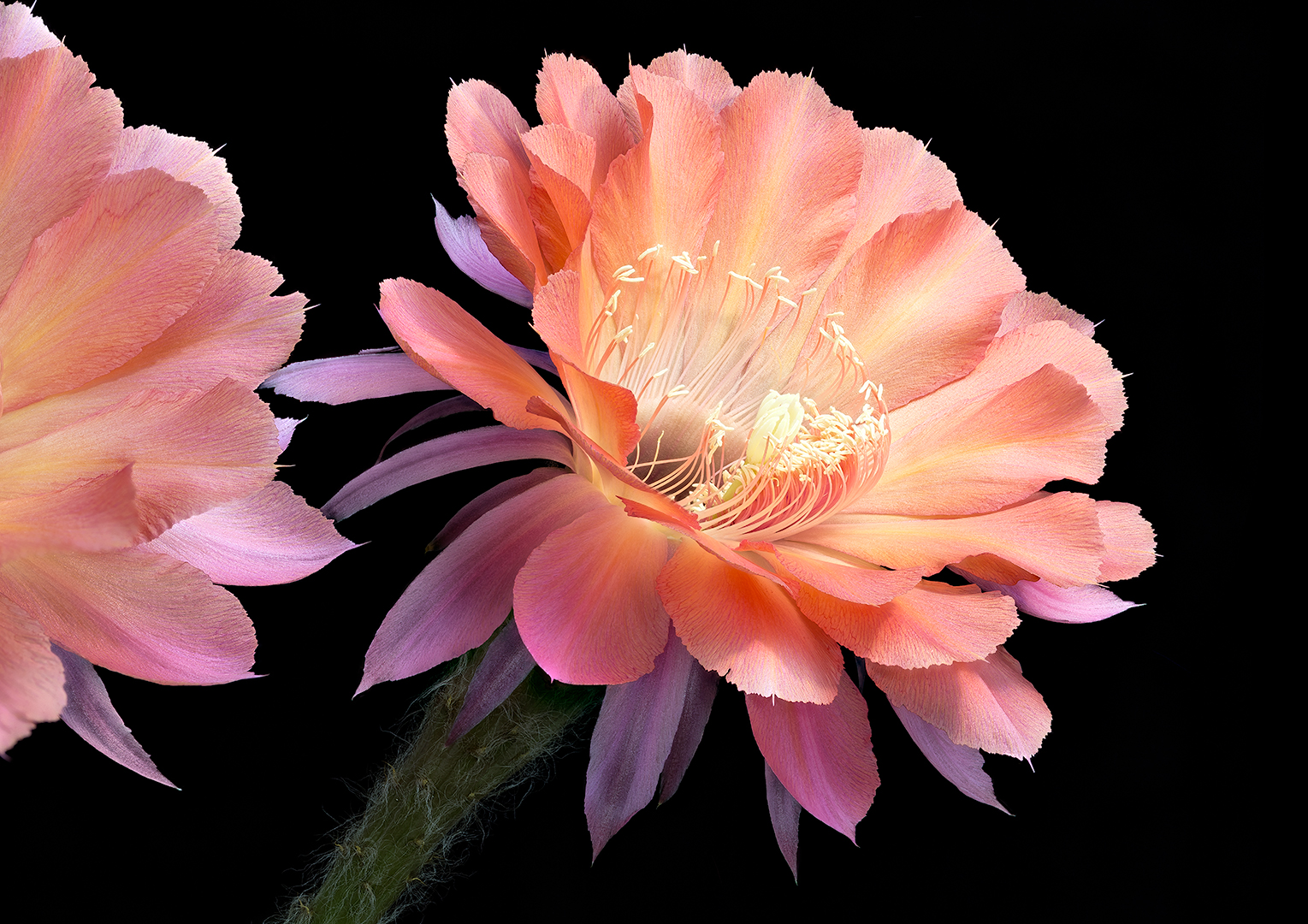 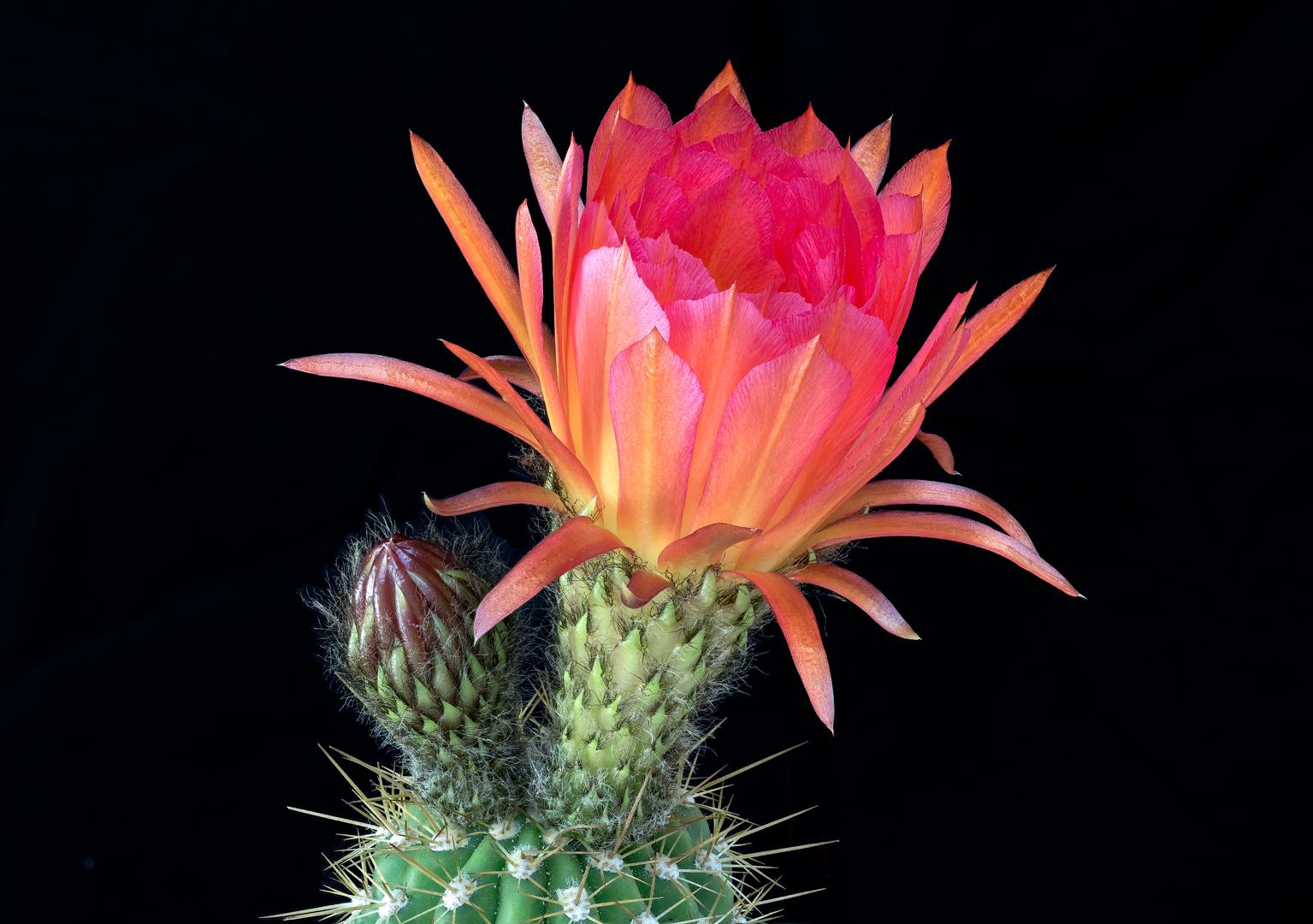 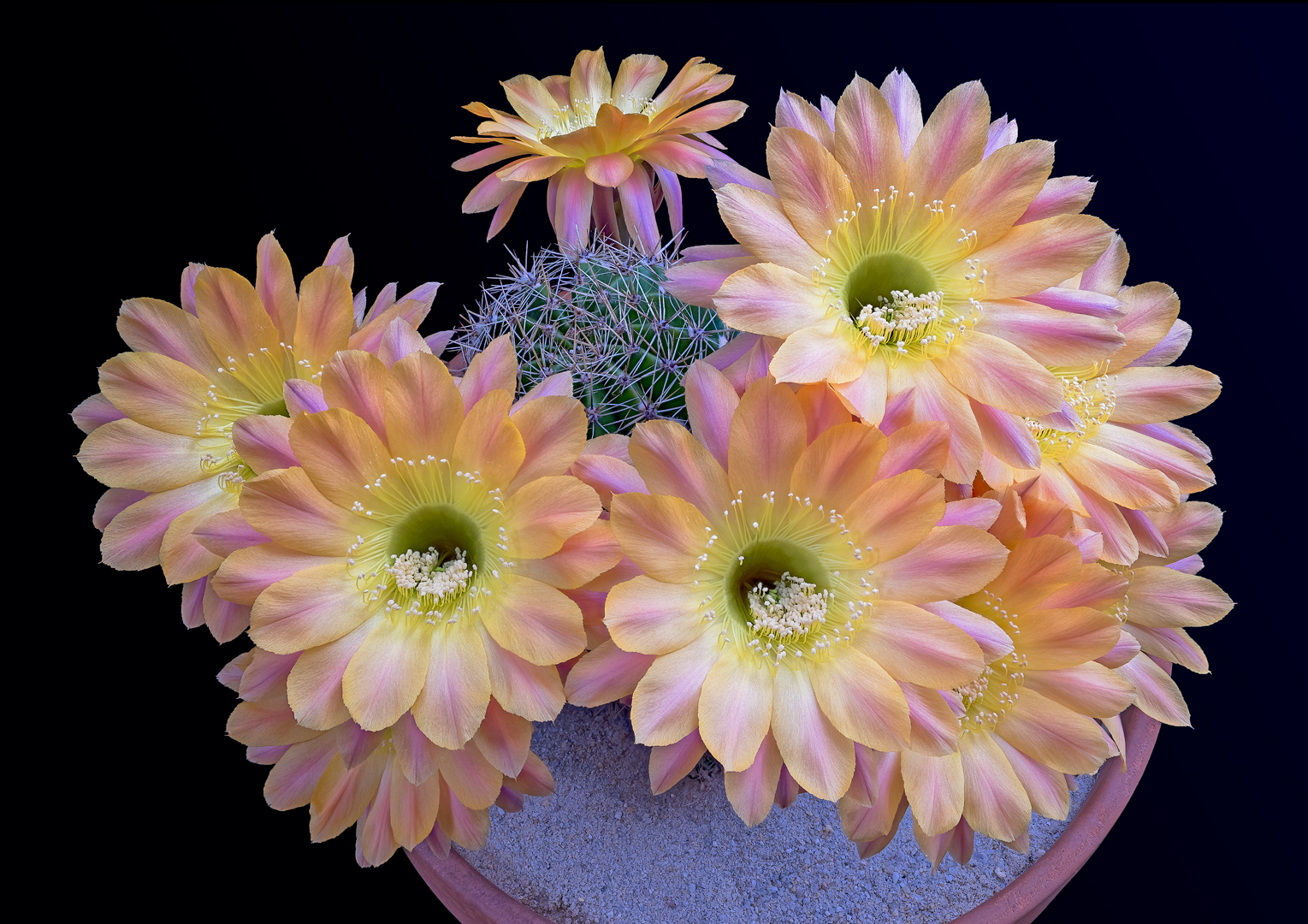 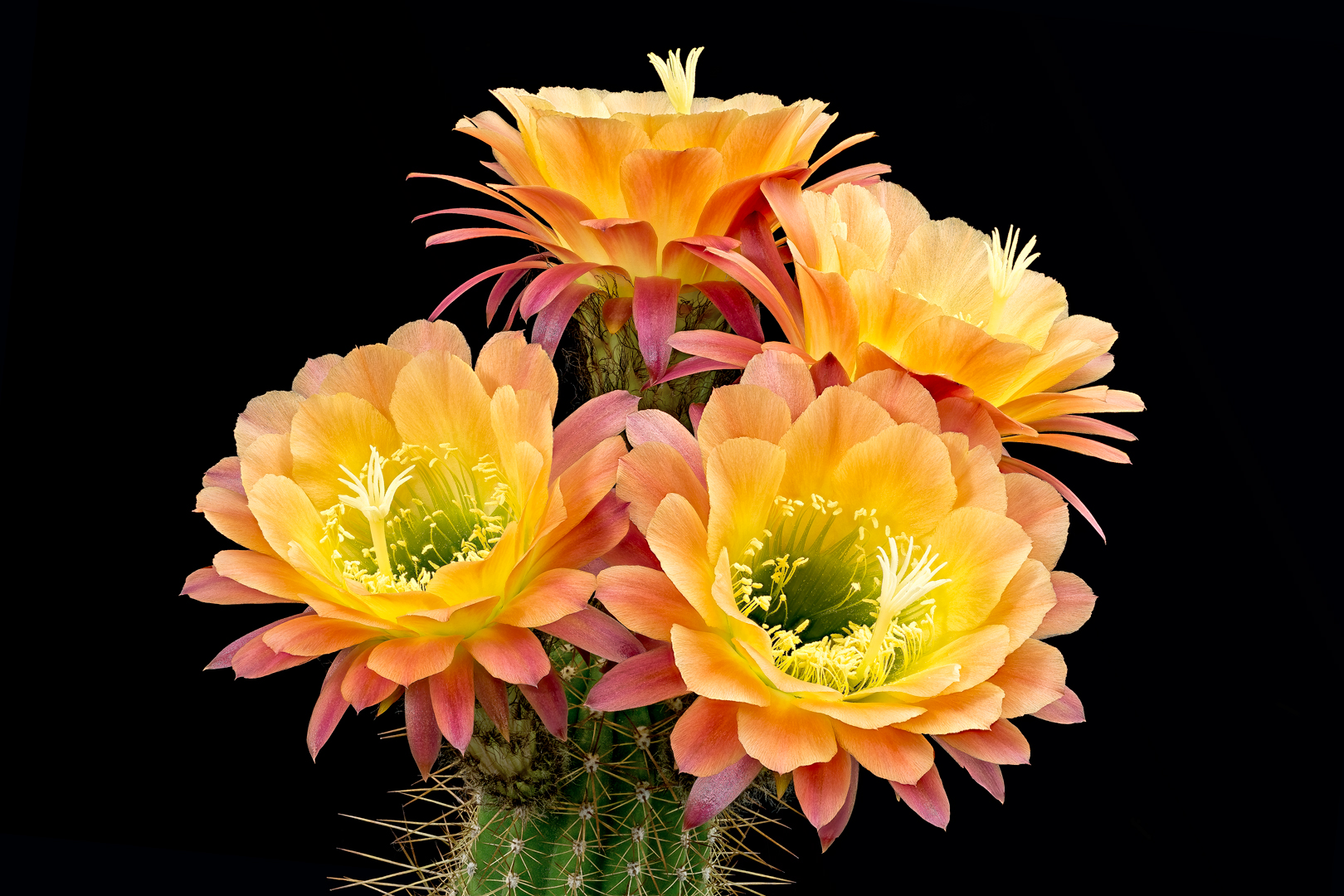 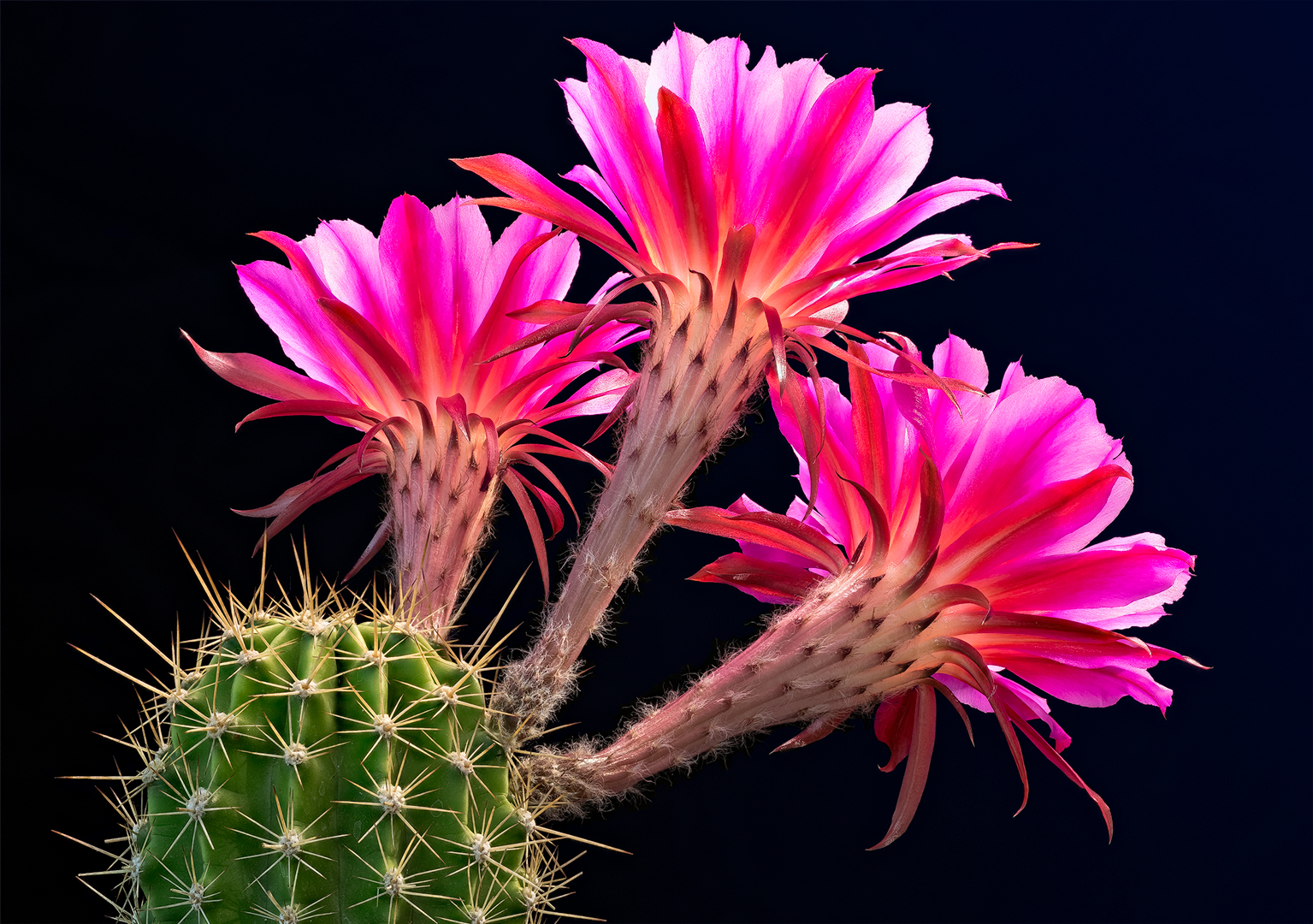 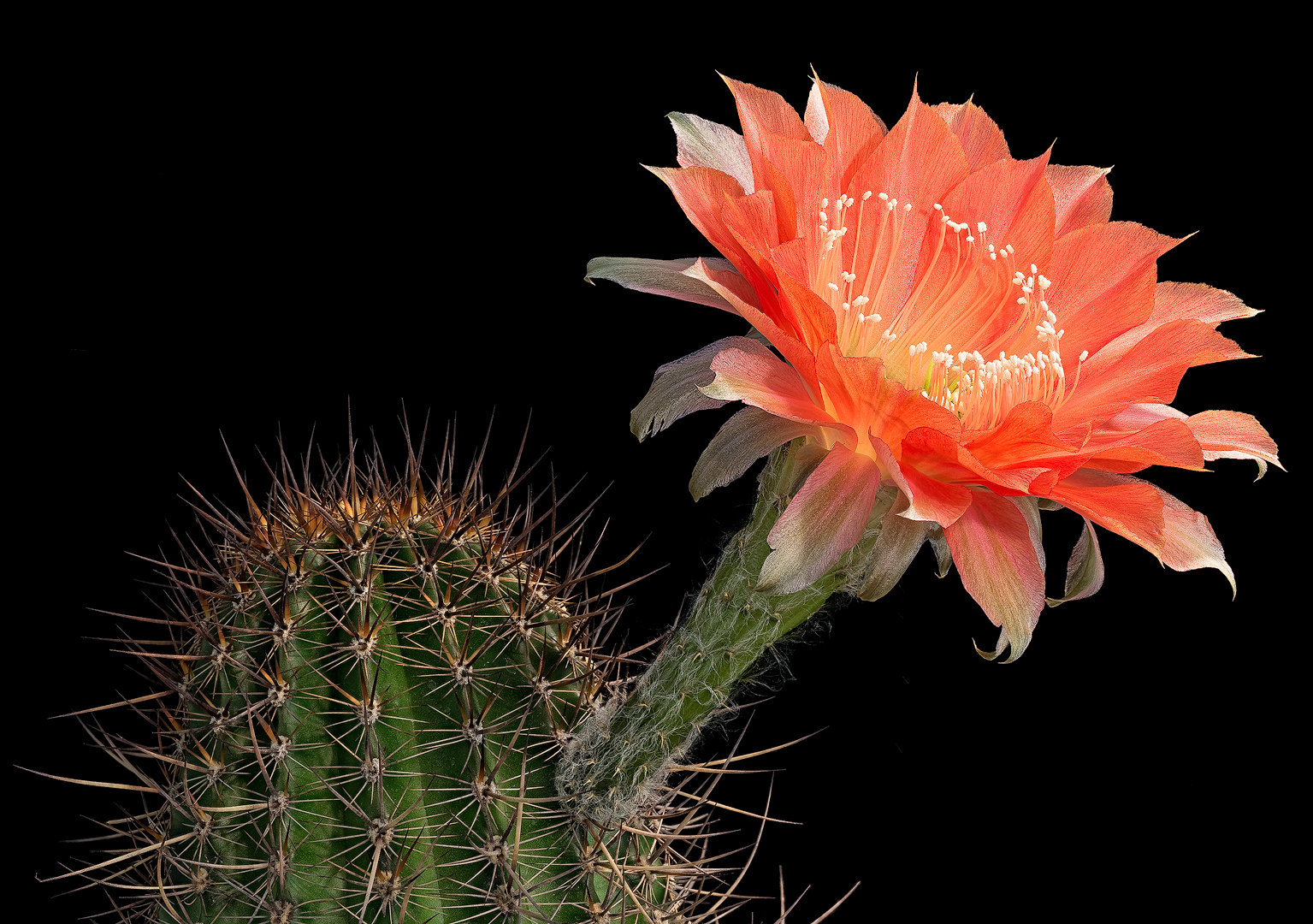 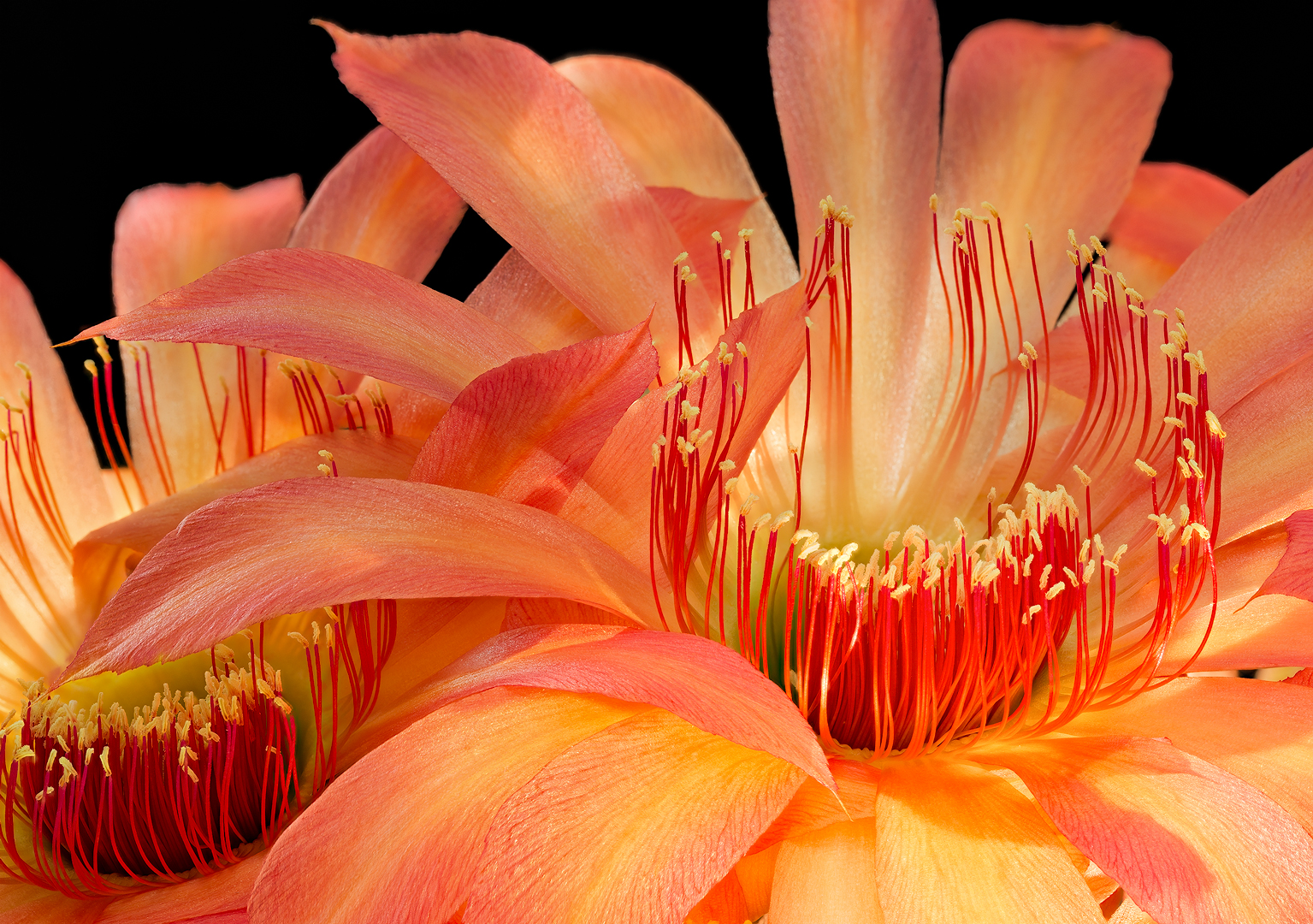 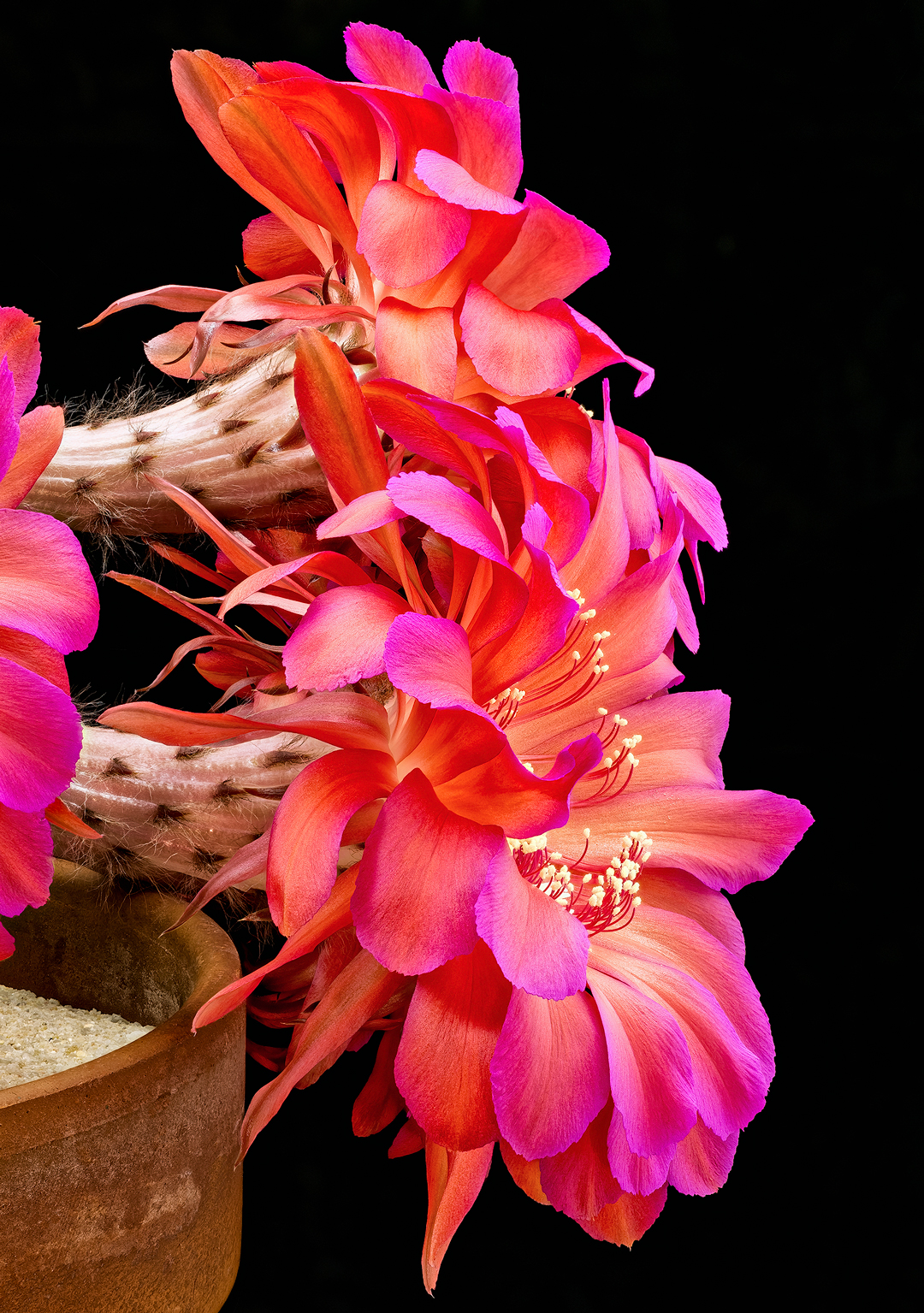 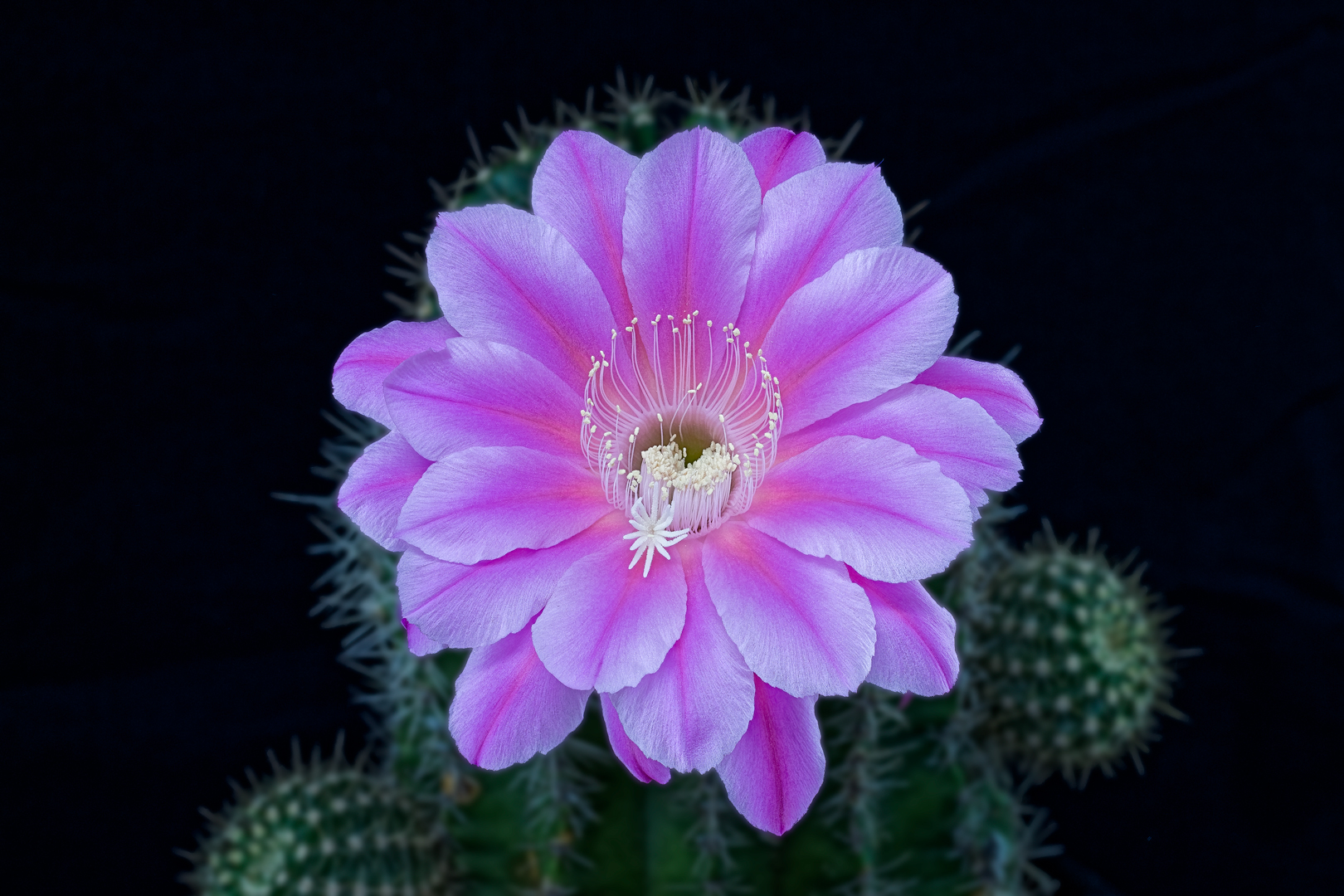 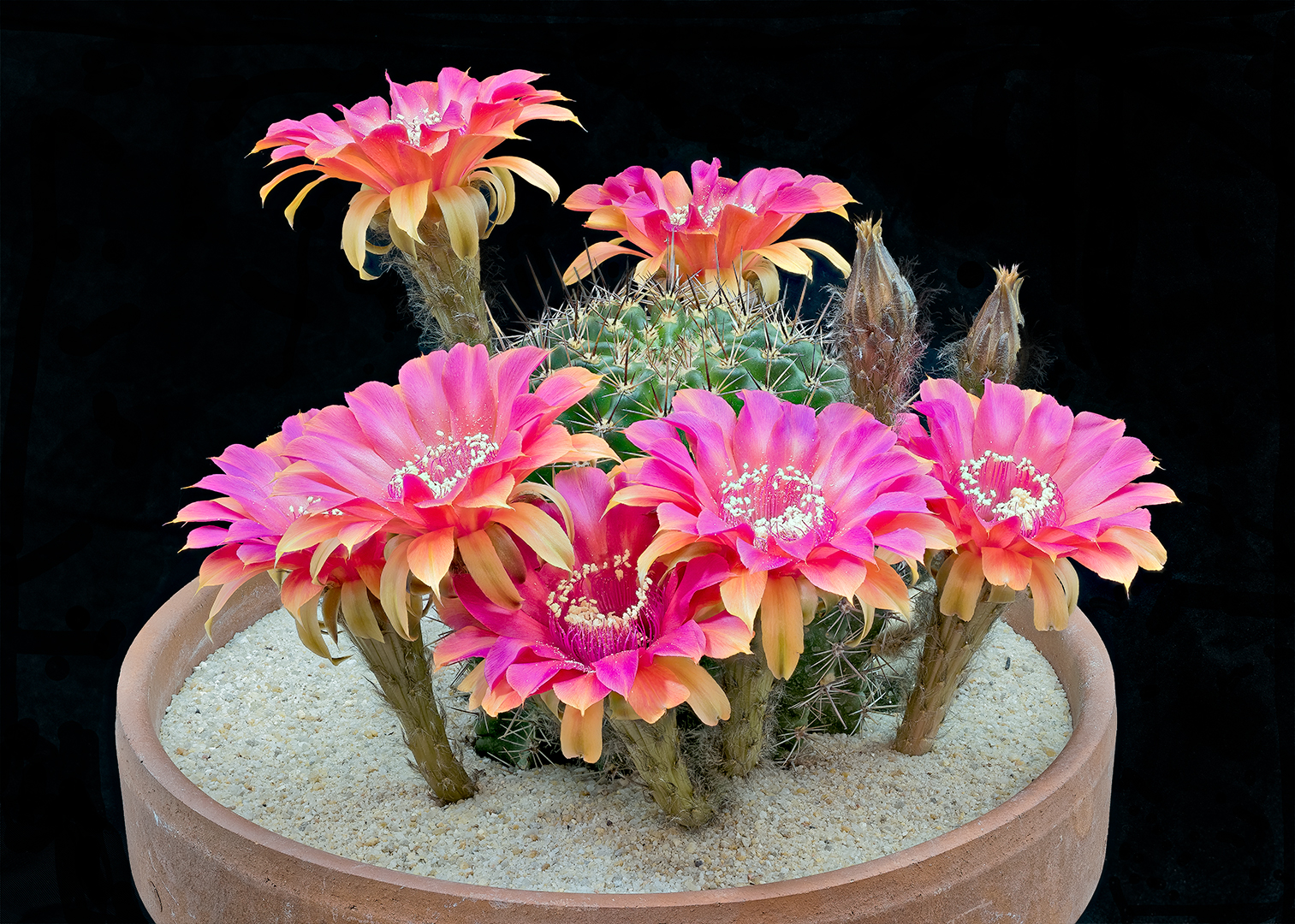 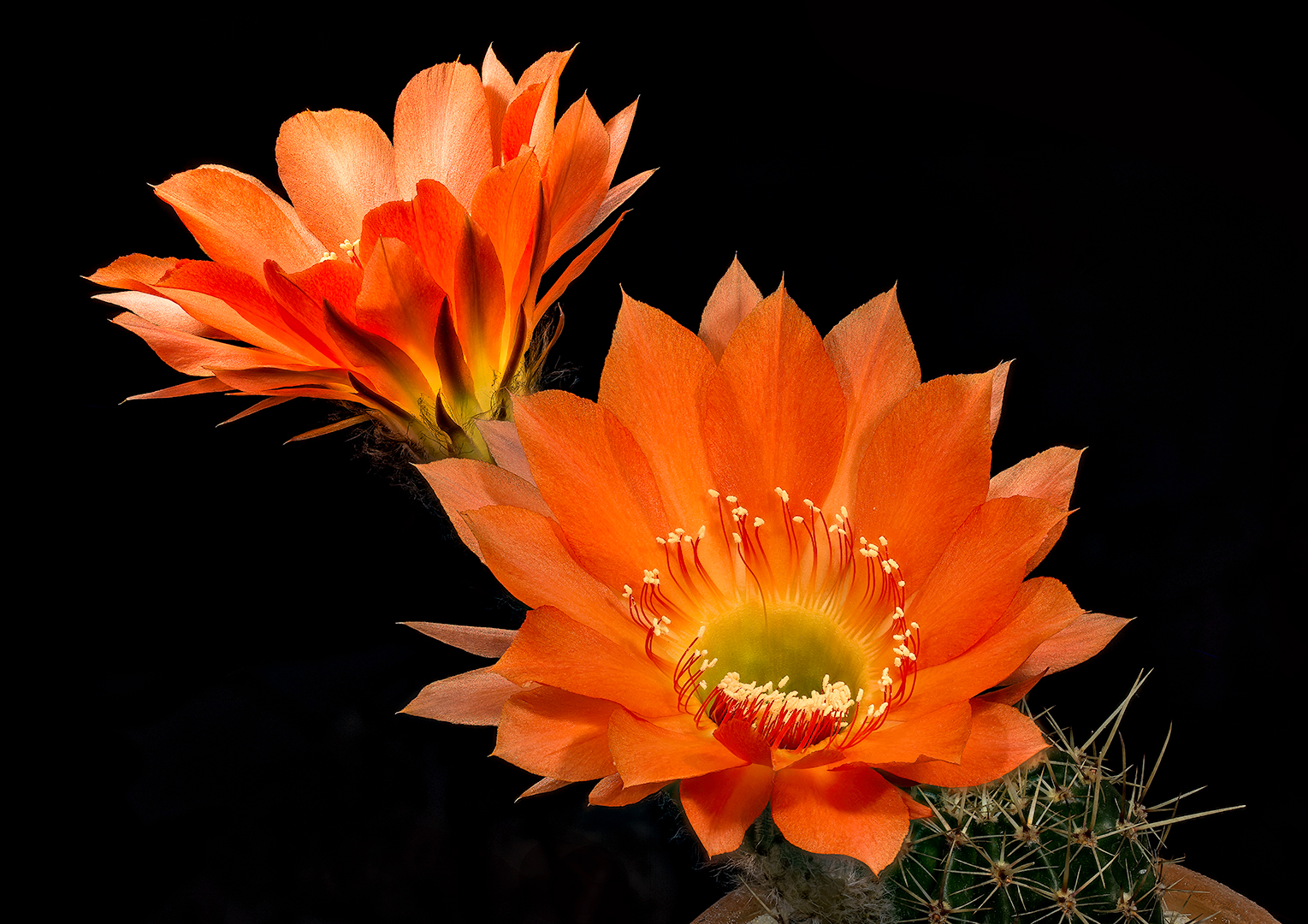 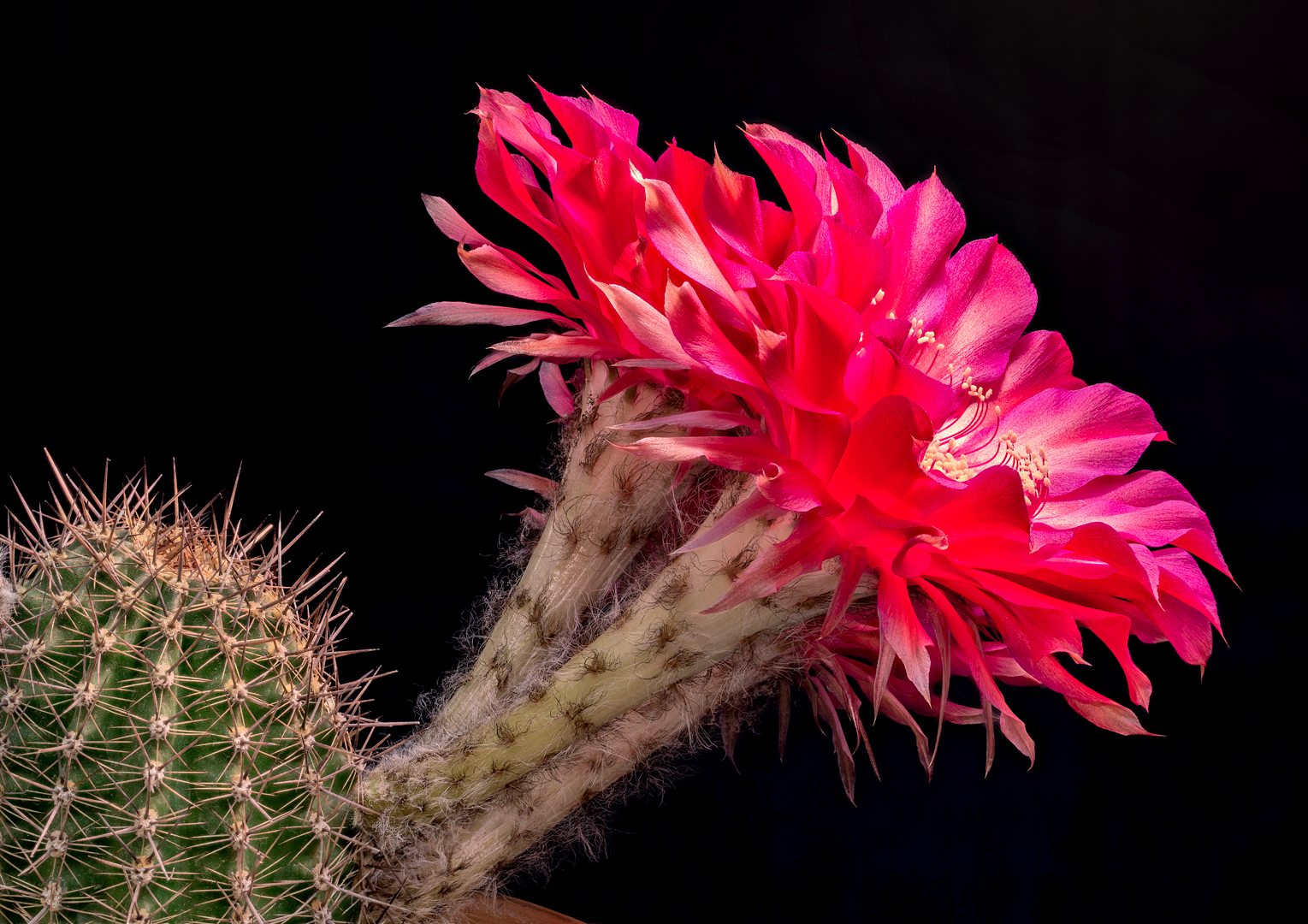 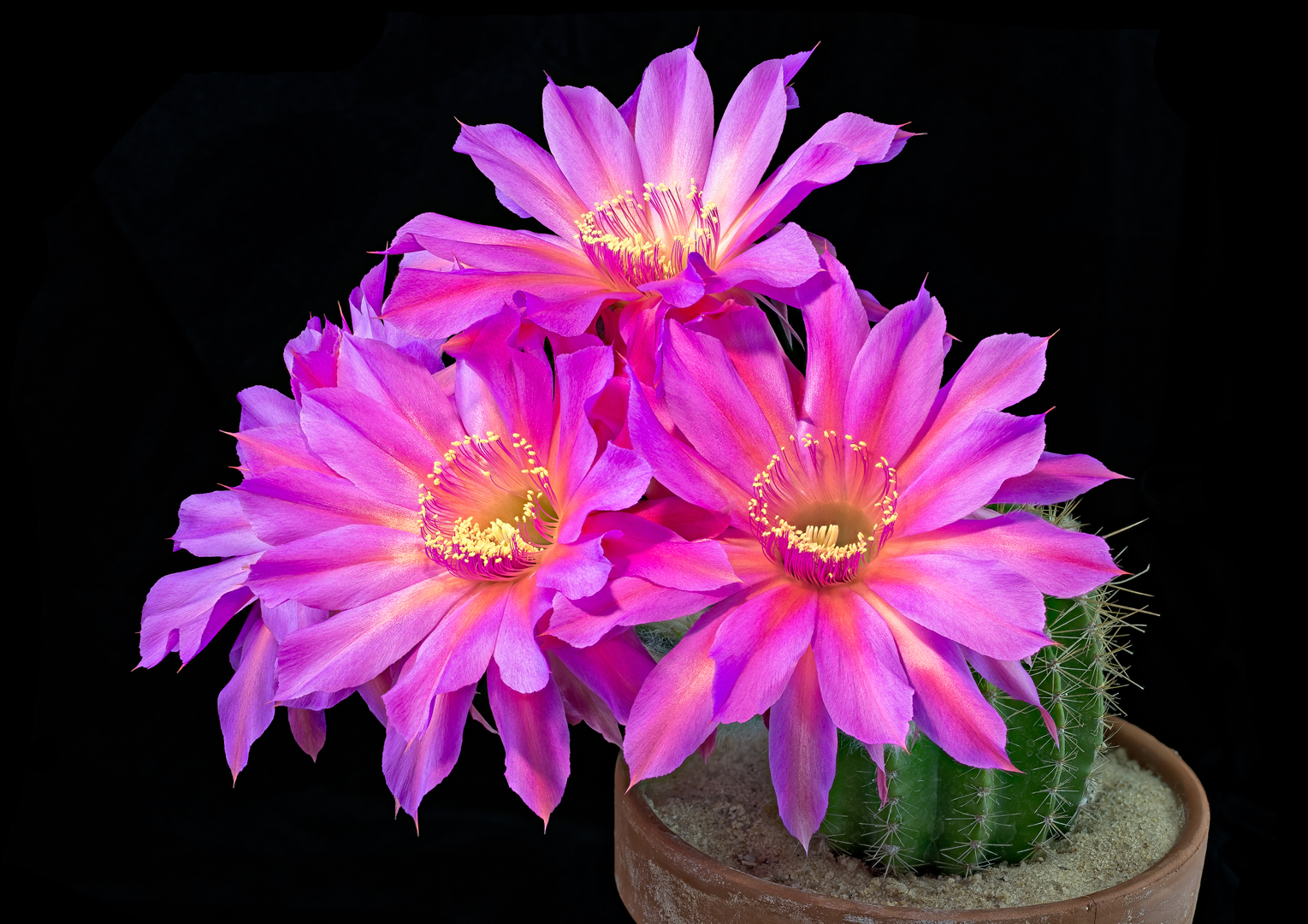 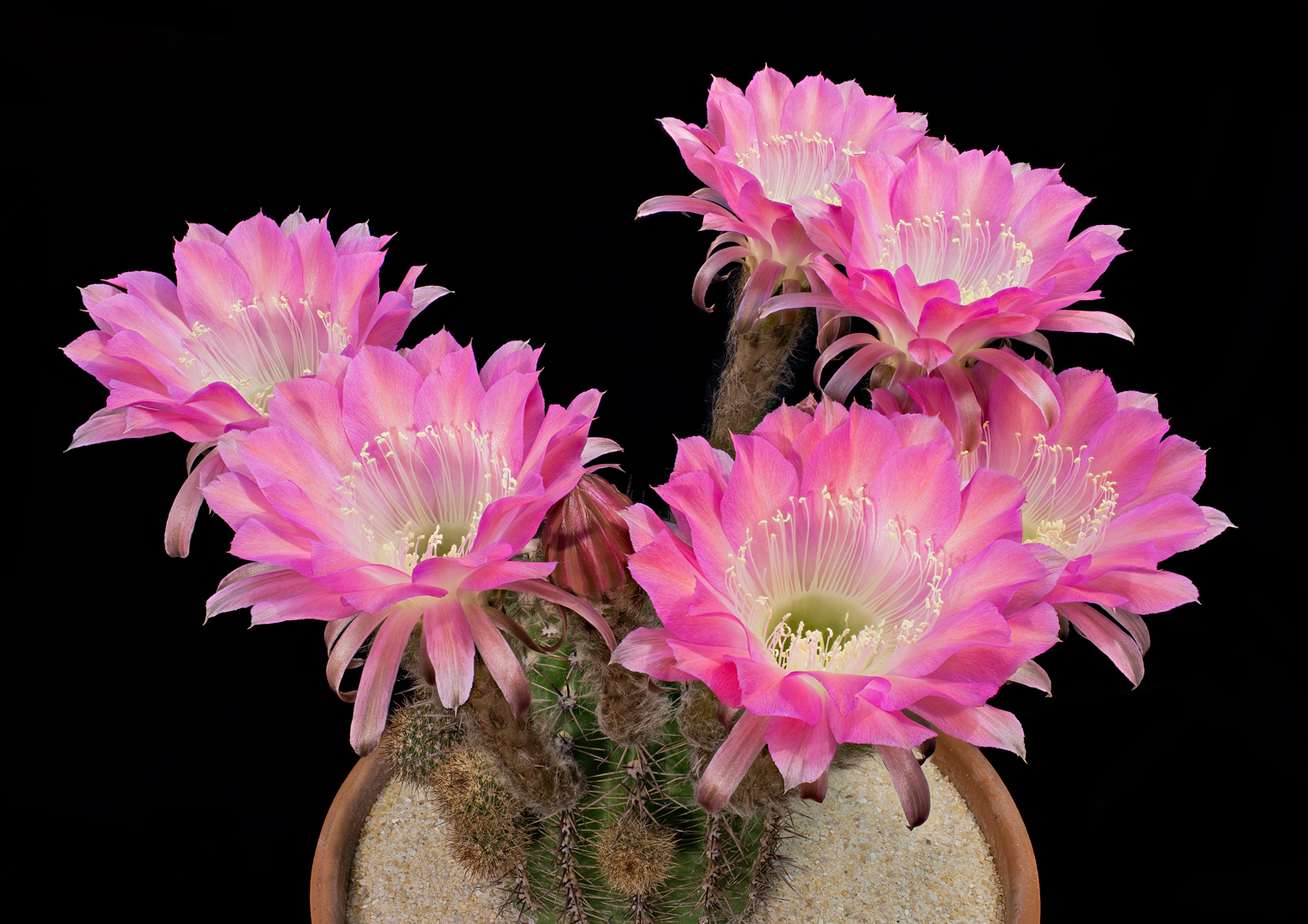 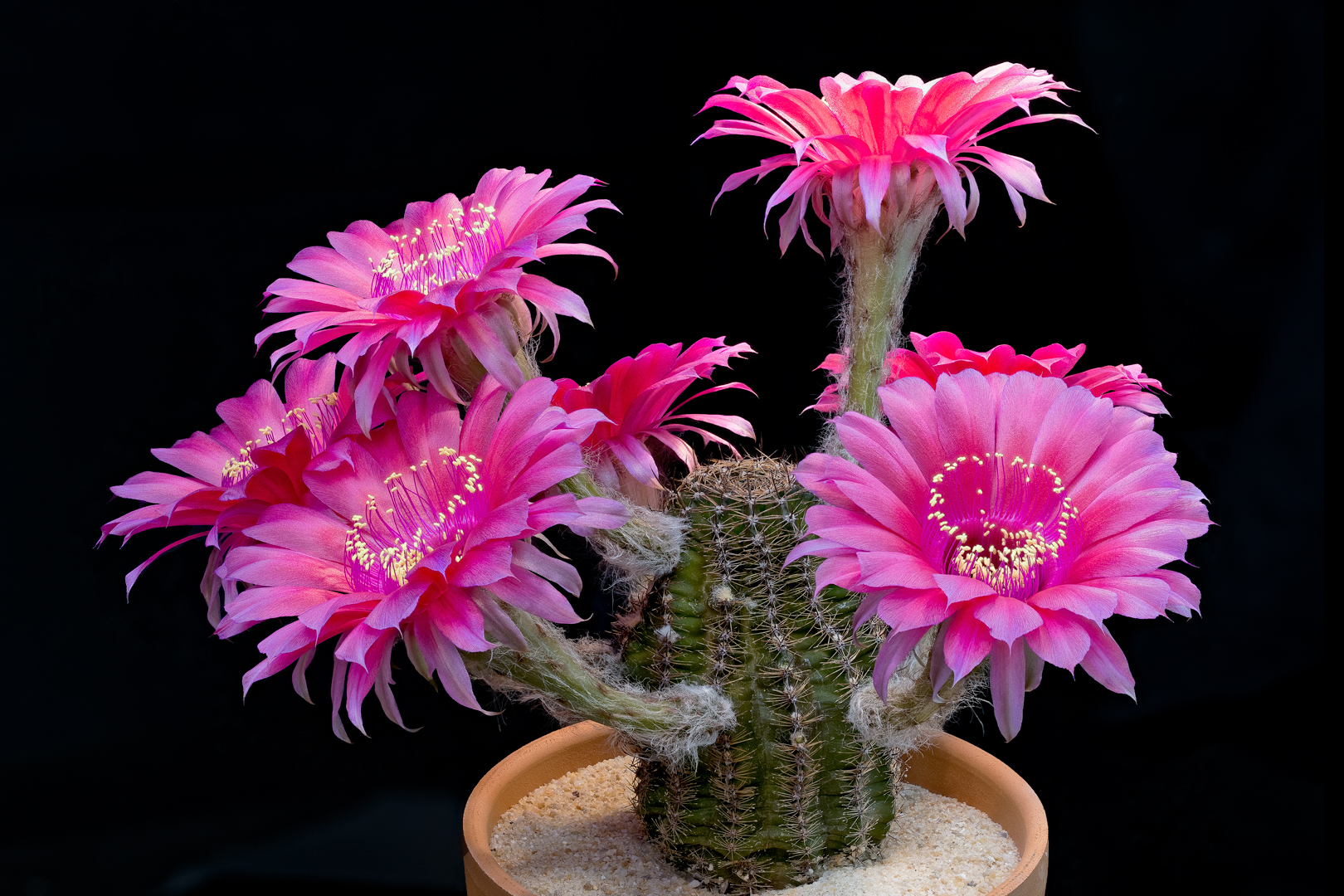 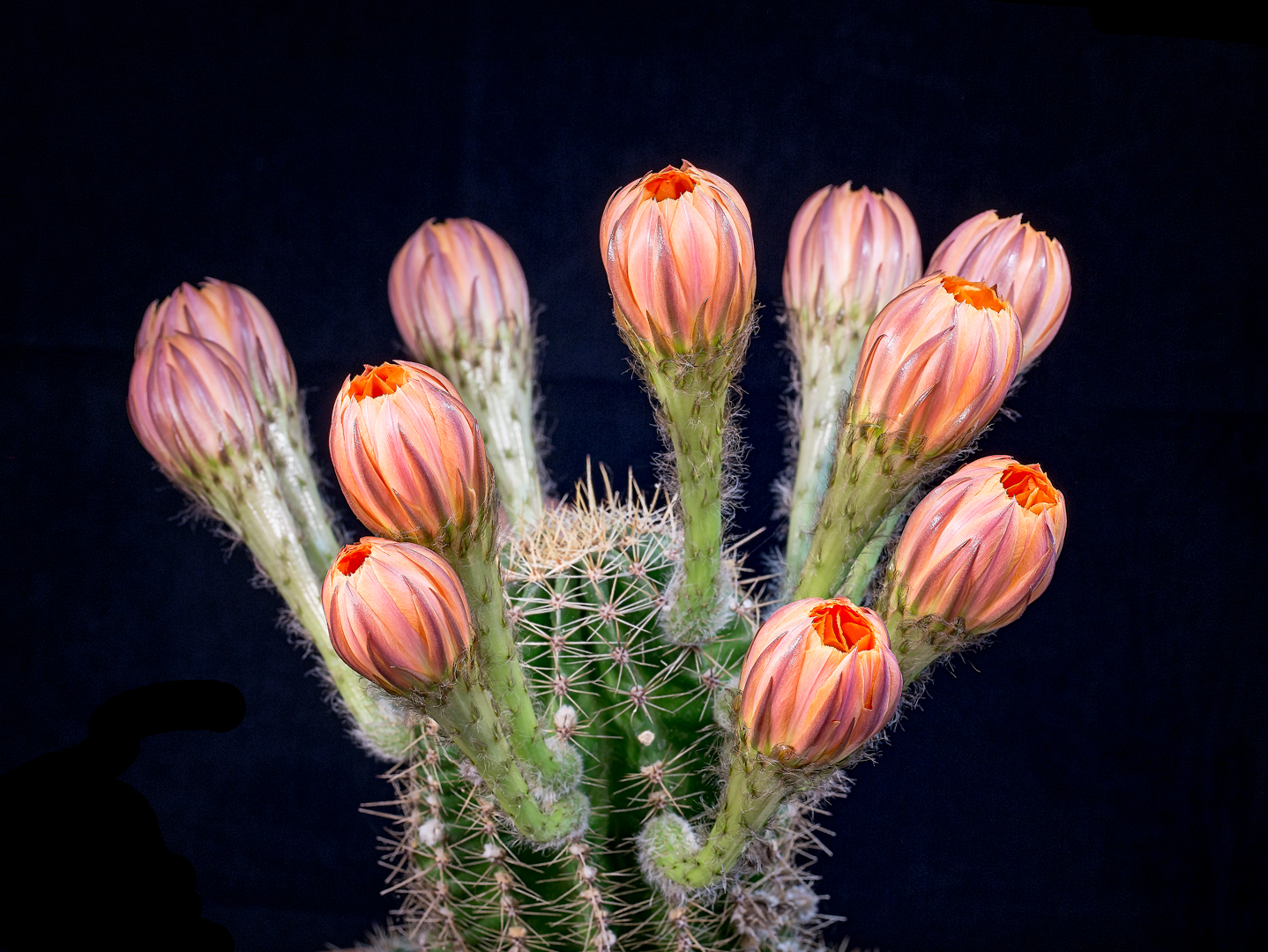 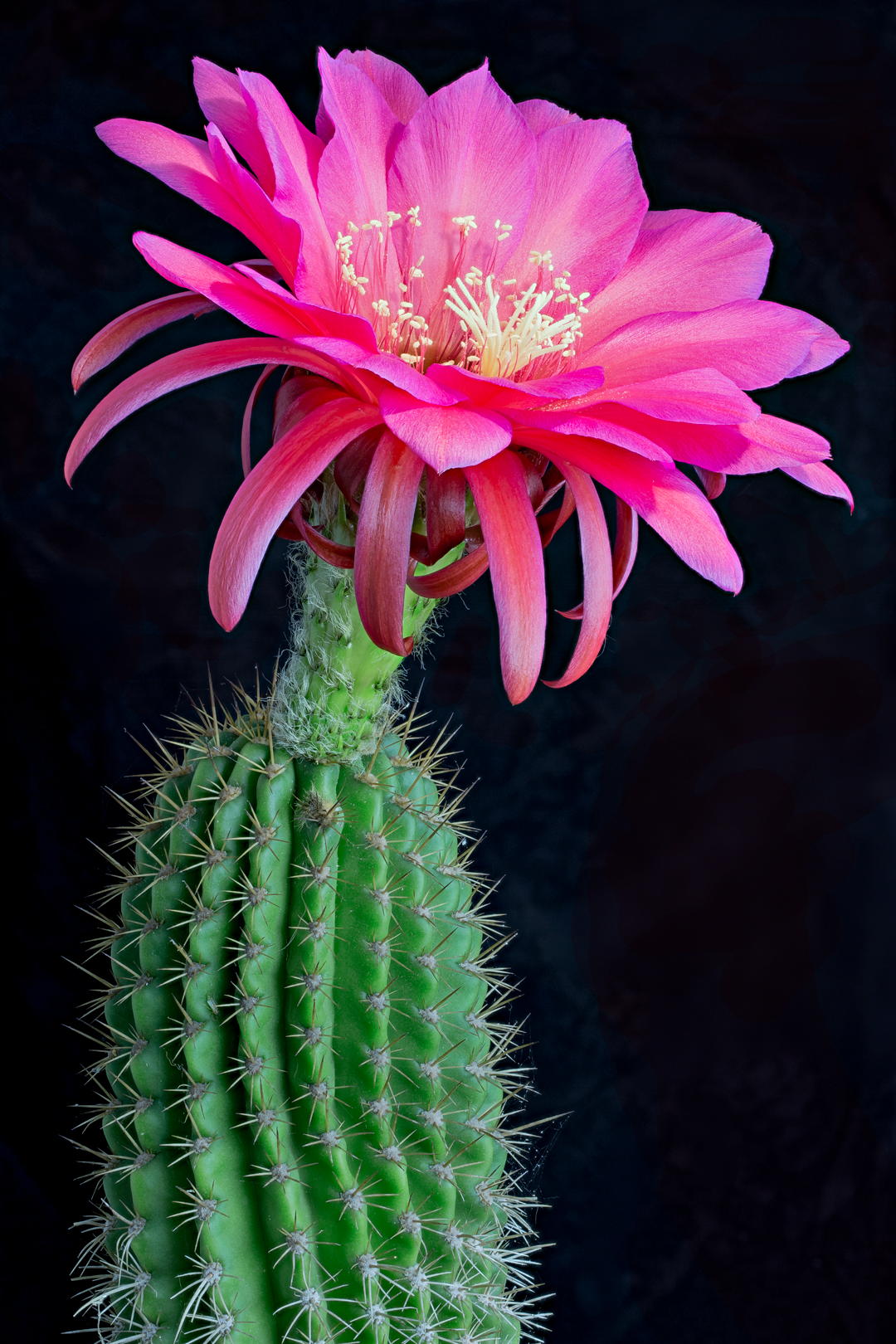 Focus Stacking: How My Still Images Are Created

When I started imaging Echinopsis flowers, I discovered that only a very small portion of the typically wide and deep flowers would be in sharp focus. That resulted from the limited depth of field one gets when shooting photographs up close.

Sure there were occasions when having just a tiny bit of the image in focus yielded a nice artistic effect. But the vast majority of time, the results weren’t artistic, they were simply disappointing, especially when printed at large sizes.

This led me to try a specialized type of photography known as “focus stacking.” Focus stacking allows you to create a final image where much, if not all, of the subject matter is in focus. I now use this process on almost all of my still images, even in instances where I decide to have only a portion of the flowers/cactus body in focus. By taking the focus-stack approach, I can later decide where I want the entire image to be in focus or only a certain portion there of.

To create a focus-stacked image, I shoot 100-200 images of a flowering cactus. All images are taken from the exact same angle and with the same camera settings save one: the focus setting. In each image, I vary the focal point ever so slightly, typically moving from having the very front of the flower/flowers in complete focus until the point in focus has moved past the backs of the flower/flowers and the body of the cactus.

Thereafter I use special software designed to assemble the most in-focus bits of each of these 100+ images into one final image that’s almost entirely in focus. While focus-stacking software is incredible, the process is far from fully automated and has numerous challenges and issues that often can’t be overcome. In fact, each of my still images takes as much or more work to create than my timelapse videos do.

One challenge is movement of flower petals while the 100+ images of the “same” view are being taken. The reality is that cactus flowers are in motion from when they start to open until they wilt and die. Most of the motion is gradual and not obvious to the naked eye over short periods. However, even while working as fast as possible, it takes 5+ minutes to shoot 100-150 images with varied focus points. Often that’s sufficient time for one or more petals to move enough to require a great deal of manual work to produce a final single image — if one can be produced at all.

Below is a visual example of the sort of problems one runs into when stacking images. Look carefully at the flower petals and you’ll notice that in many places spikes from the cactus behind the petals appear to be piercing them. That wasn’t the case in real life, but rather is the result of the software being unable to determine what in-focus aspect should win and thus merging two parts together to create one messed up image.  A great deal of hand editing is required to produce a final result that returns the petals to a pristine state and banishes the spikes to the background.

Perhaps the most common question I get about my images is whether I’ve “Photoshopped” them, i.e., whether I’ve juiced up their appearance using features of Adobe Photoshop or something similar. I think the funky and super bright colors of the flowers make viewers wonder if it’s post-processing that yields their otherworldly look vs. nature itself.

However, in the case of Echinopsis flowers, reality is stranger than fiction. What I mean by that is that my images always understate rather than overstate how funky these flowers appear in real life.

Rather than using Photoshop to embellish the look of these flowers as people often suspect, I’m almost always using it to tone down the appearance of the flowers. The colors of these flowers are so saturated, so vibrant in real life, that even the best computer monitors and printers cannot recreate them faithfully. So what I actually do in Photoshop is reduce the color saturation of the images, typically by 15% but often by 25% or more, to get something that can be displayed successfully.

Bottom line: While I think you’ll find that the flowers in my images appear crazy bright, these images understate just how freaky these flowers are.